Vienna in a snowstorm

Vienna and the Danube City in a snow storm

The Leopoldsberg is a 400 m high hill in the 19. district Döbling in Vienna. It is the northeasternmost branch of the Wienerwald and thus the complete Alps. A 180° panoramic view awaits you after a short drive. It reaches from the skyline of the Danube City to the far away Schneeberg along the hills of the Wienerwald. Read on to learn how to take photos in urban lighting and of course what can be seen in the photo. 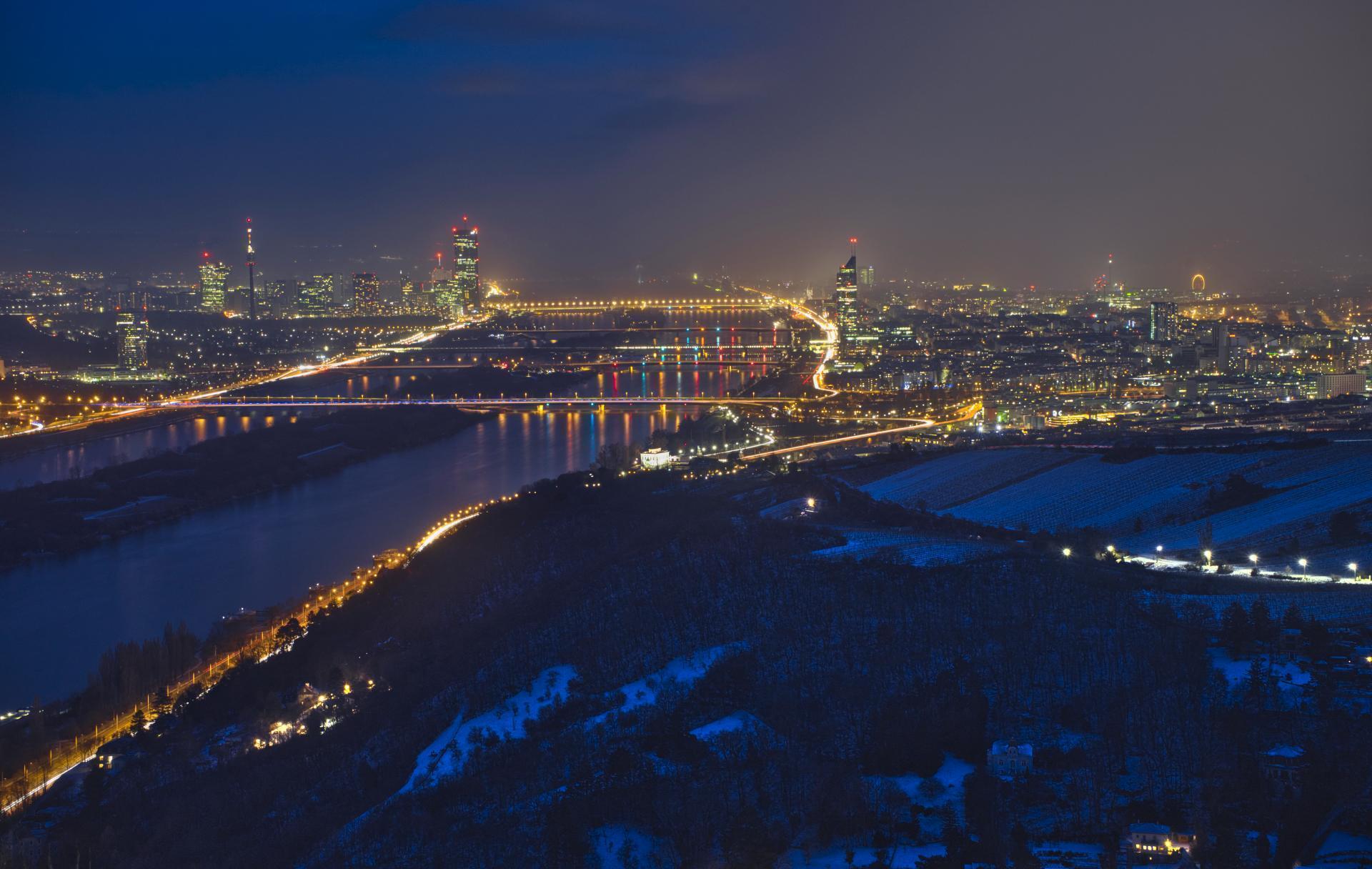 The Leopoldsberg is located at the foot of the Danube a good 20 km northwest of Vienna. There it rises like a fortress on the right bank of the Danube. Together with the lower, but even more eastern mountains Burgstall and Nussberg, it marks the north-eastern end of the Vienna Woods and thus the entire Alps.

Easily accessible by car, the best way to go is via Klosterneuburg up the Höhenstraße to the parking. From there it is only a short walk to the viewing terrace.

Click on the AR button and find out WHAT can be seen on the AR:Photo.

In the AR:Photo you can see the tall buildings of Donau City as well as the Danube Tower, the striking DC Tower and the angular Millennium Tower. Somewhat in the fog is the slim Praterturm with the Würstelprater and to the south of it the Vienna Schwechat Airport. With good visibility you can see all the way to Bratislava in Slovakia.

Just as we were setting up the tripod, a snow storm came over us from the north and covered the Leopoldsberg in clouds. It was cold and windy but we decided to wait and see. At a moment like this, I can only recommend warming soles for your feet. Just as quickly as the snow storm came, after about 25 minutes the sky tore open again from the east and offered us this unique motif of Vienna in a snow storm.

When photographing trails of light, the length of the road and the length of time the cars travel naturally play a role. On roads with little traffic, it is a good idea to combine several photos from the same pose with the different light strips to form one photo.

On roads with heavy traffic, as in this case, keep an eye on the histogram to avoid overexposing individual areas in the photo. Vehicles with colored lighting, e.g. rescue or police cars. If the depth of field does not play a major role, the aperture can be opened a little in order to limit the outshining of street lamps and strips of light caused by the diffraction blur. In the final photo development, the lights and haze were reduced, the shadows increased and the sharpness raised.

I hope to have captured the mood with the composition of clouds, infrastructure lighting and light trails and I am happy if you like this photo.