Schneeberg with Peterskirche on a winter day

The Schneeberg is a mountain range of the Rax-Schneeberg-Gruppe. It is the highest mountain in Lower Austria and the easternmost and northernmost two thousand meter high summit in the Alps. The small baroque St. Peter and Paul Church, easily accessible by car, should serve as the foreground. I'll tell you where I took the photo, what can be seen on it, and when to take a photo with a polarizing filter. 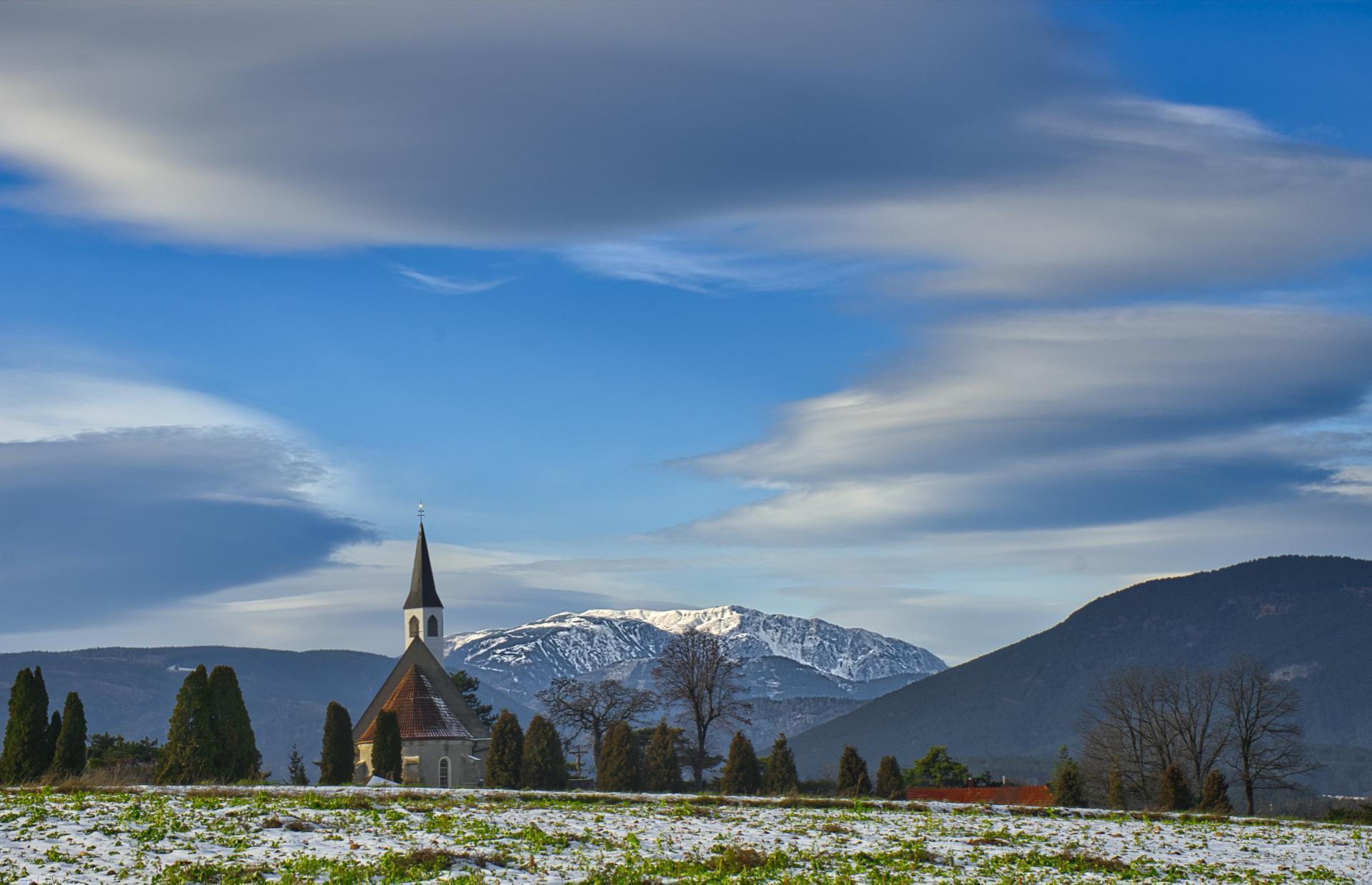 The Schneeberg is a mountain range in the Rax-Schneeberg group. At 2076 m, it is the highest mountain in Lower Austria and the most easterly and northerly two-thousanders in the Alps. Its dominance of almost 50 km is only surpassed in Austria by the Grossglockner. The Schneeberg plateau has been accessible since 1897 by the Schneeberg Railway with a rack railway.

The Roman Catholic Expositur Church, consecrated to Saints Peter and Paul, is located in the Dunkelstein district in the municipality of Ternitz in the Neunkirchen district. From the car park, a short walk along the gravel road leads to the photo spot.

If you want to know more WHAT can be seen on the AR:Photo, just click on the AR button.

There is a picture composition from the imposing Schneeberg and the baroque church surrounded by well-tended trees on a slightly arched hill that forms the near foreground. Here there are both beautiful sunsets with backlight and sun star, as well as side rear light in the morning that vividly illuminates the Schneeberg and its contours. In the afternoon, however, this usually disappears in a darkening silhouette.
The AR:Photo reveals, among other things, the exact position of the Fischerhütte and the Berghotel Hochschneeberg at 1799 m. The SLOPE 3D Model confirms the steepness of the Ries walls at around 60°.

I took my photo in the morning with my Sony A7 II and my plug-in polarizing filter. Plug-in filters have the advantage that they can combine different neutral density filters (ND) and polarization filters, but they are more expensive, heavier and take up more space than screw-in filters. With a polarizing filter you can really make the blue of the sky shine. However, only if there is actually polarized light in the subject. If, for example, the angle to the sun does not match or the sky is very cloudy, there is often only a little polarized light that could be filtered out with a polarization filter. This is the reason why polarizing filters sometimes have very little effect.

Since the fringed UFO clouds look more spectacular than the meadow in the foreground, I decided to put the horizon on the lower third line. The subsequent photo development was done with Luminar 4.

I hope the Schneeberg, the St. Peter and Paul Church and the clouds complement each other to create a beautiful picture composition and I am happy if you like this photo.