From the Peilstein into the sunset

From the Peilstein heading west into the sunset

The Peilstein in the southern Vienna Woods is popular as a climbing garden because of its high rock faces sloping to the west. After under an hour's walk, the Peilsteinhaus, built in 1923 by the Austrian Alpine Club, awaits you at the summit. Further ahead by the rock faces the forest thins out and gives a clear view to the west. In the following you will find out how I take photos in moonlight, what can be seen in the photo and why very nice pictures are possible in the blue hour. 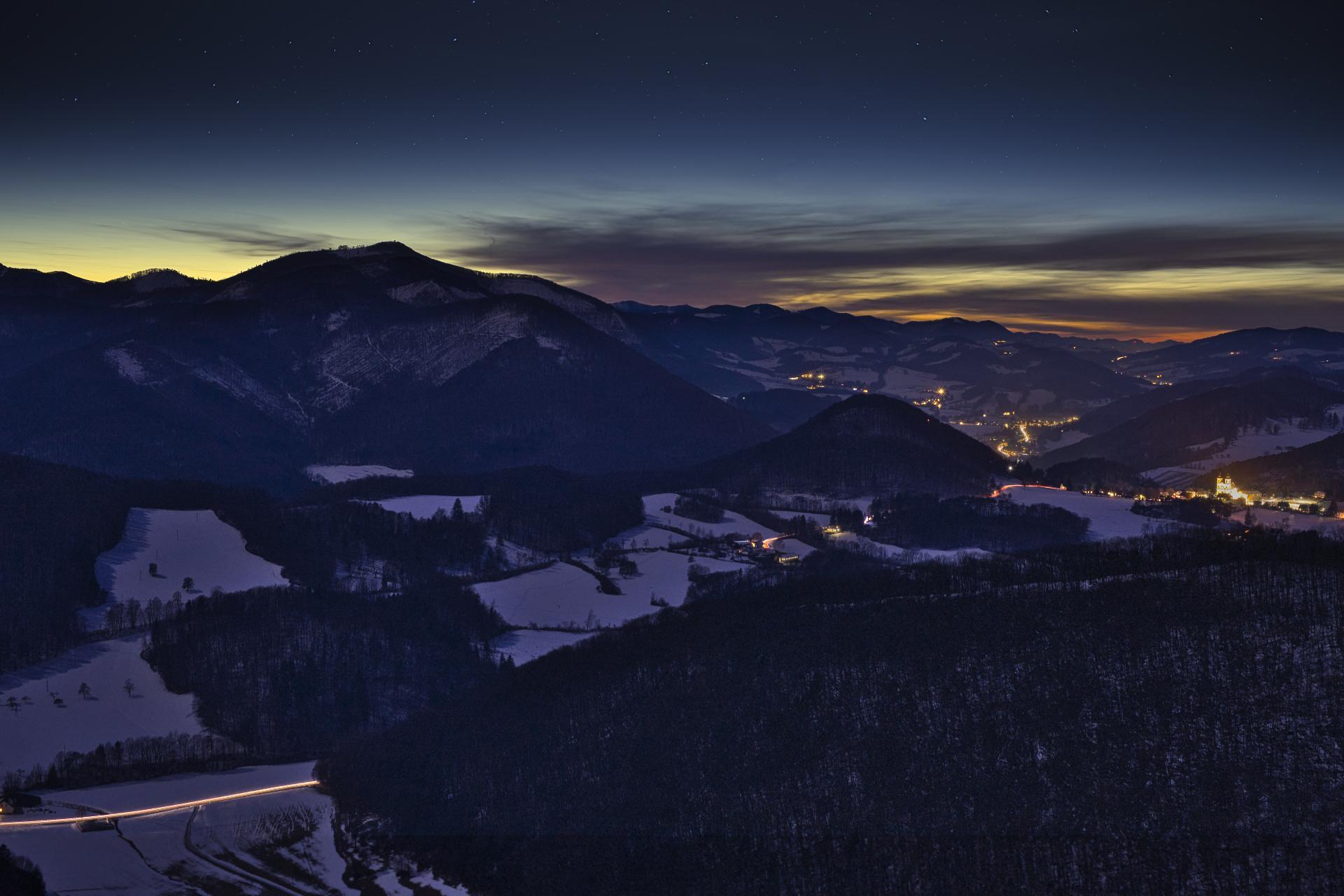 The steep-walled Kalkberg Peilstein in the southern Vienna Woods is 716 m high, is located in the municipal area of ​​Altenmarkt and Weissenbach and is popular as a climbing garden because of its steeply sloping rock faces towards the west. The Peilsteinhaus of the Österreichischen Alpenverein, built in 1923, stands at the summit.

About 50 km southwest of Vienna lies the village Schwarzensee. From there you walk 45 minutes along the road or directly up the forest path to the Peilstein. Then it's just a short, level walk to the rocks to the photo spot.

Click on the AR button and find out WHAT can be seen on the AR:Photo .

In addition to the steeply sloping rocks, there is a panorama from the Schneeberg, over the striking Hocheck and the elongated Triestingtal to the Marienkirche von Hafnerberg. In addition, the AR:Photo shows a large number of mountain huts starting at the Enzianhütte up to the Kaiserkogelhütte, which is almost 40 km away.

For the motif, we chose a point in time with sunset, moonlight and stars. My Sony A7 II with ISO 1600 and the inexpensive Sony lens with a fixed focal length of 50 mm and a maximum aperture of f/1.8 were used. This combination is light-sensitive enough to photograph stars without recognizable star lines even with a maximum exposure time of 10 seconds. Although the light pollution at the photo spot and surroundings was low, the crescent moon from behind and the sunset from the front outshone the stars. Such a constellation gives the topography an extra boost in plasticity.

Nice photos in the blue hour

In the blue hour, i.e. in the time after sunset and before the onset of nighttime darkness, the brightness of the moon, sky, artificial lighting and landscape is very balanced and the sky is not yet completely black. Then the blue sky with the orange horizon and artificial lighting creates a very strong color contrast. This is why this time window usually delivers very nice pictures.

I photographed the motif from the same pose and camera setting at different points in time, in order to subsequently merge them into one photo with Luminar 4.

I hope to have captured the mood of the photo spot with this image composition and the various light sources from the moon, sunset and artificial infrastructure and I am happy if you like this photo.